With all the attention being devoted in recent weeks to the assassination of Suleimani and potential war with Iran, to Ukraine and impeachment, and to China and the coronavirus, it’s easy to lose sight of an isolationist trend in Washington worrisome in its own right. Although not everyone who wants to “make America great” means to cut it off from the rest of the world, the current regime’s isolationist instincts are powerful, persistent and perverse.

This came home to me during my recent trip to India to visit with Wesleyan families and to talk with prospective liberal arts students. Many told me that the United States seems less welcoming than before, and concerned parents wondered whether their children would feel at home in a country that seemed determined to cast foreigners in a harsh light. In some cases, they were attuned to this hostility because they saw their own government in Delhi using similar tactics. I tried to assure them that most Americans were open to meeting foreigners and that our traditions of hospitality remain strong. But they contrasted the current US climate with what they see in Canada, and to some extent in Australia.

Here at Wesleyan, we have a long tradition of collaboration with scholars and teachers from outside the United States. Nobel Prize winning chemist Satoshi Omura still looks back on his time as a researcher at Wes as formative to his experiments in developing new medicines from organic materials. African drummers like Abraham Adzenyah, Javanese gamelan virtuosos like Sumarsam, and dancers like Eiko Otake, have made Wes their home for decades because of its open learning environment, one that cultivates respect for tradition as well as enthusiasm for innovation. I proudly told my interlocutors in India about our longstanding Navaratri Festival of music and dance, and about the recent book by Hari Krishnan on how Bollywood creatively appropriated those traditions.

Shortly after I returned to campus, the Trump administration announced a new set of travel restrictions on people coming to the US. On Jan. 31 the President signed a proclamation banning visa applications from Eritrea, Kyrgyzstan, Myanmar and Nigeria. The reason given was that these countries presented risks because of their security procedures and information sharing. The administration’s announcement also included harsh immigration restrictions for people from Sudan and Tanzania.

The announcement is of a piece with the administration’s goal to restrict immigration of (almost) all kinds. For months in 2019, it refused to sign off on a new framework for refugees – the result being that in October ZERO refugees were legally admitted to the US. That’s the first time a month went by without the US providing legal refuge to someone. When President Trump eventually approved a legal ceiling for those seeking refuge here, it was for a mere 18,000 refugees, an all-time low. Even the Wall Street Journal’s editorial page complained in regard to the latest executive order that “punishing innocent people trying to come to America legally undermines Mr. Trump’s claim that he opposes illegal immigration, not immigrants more broadly.”

At Wesleyan, we value the vibrant, cosmopolitan community that we build in Middletown. About 15% of our students come from outside the US, and we cherish the opportunities to learn from one another. Rather than blocking off parts of the world from interactions with Americans, we believe in building positive, effective interconnectivity. Rather than refusing to listen to others we perceive as different from ourselves, we should cultivate the sharing of stories as a path to a broader more powerful education.

Let’s take Ahmed Badr’s ’20 Narratio project as our inspiration. Ahmed came to the US as a refugee from Baghdad and will graduate from Wesleyan in May. Determined to empower others, he created Narratio which invites youth around the world to share their stories  through the publishing of poetry, photography, art and narrative. Already Narratio has published 300+ works across 18+ countries.

Let’s push back against the anti-immigrant, anti-refugee messages coming from Washington. And let’s remember to listen to one another’s stories – lending an ear with special care to those that may come from faraway places.

Just after Wesleyan’s Commencement, professors Lori Gruen (Philosophy and FGSS) and Kari Weil (COL) hosted another group of scholars whose multi-week residency is sponsored by the Animal Studies Institute. This field has been taking off internationally, and Wesleyan has been recognized as a place where some of the most interesting scholarship is being produced. Lori and Kari have recently co-edited an issue of Hypatia, on the theme of “feminists encountering animals,” which is based on a conference they put together at Wes a few years ago. There has been an online forum responding to the journal here.

I learned today that Ellen Thomas, research professor of Earth and Environmental Studies at Wesleyan, has been awarded the Maurice Ewing Medal from the American Geophysical Union. Prof. Marty Gilmore wrote to let us know that the award recognizes “significant original contributions to the scientific understanding of the processes in the ocean; for the advancement of oceanographic engineering, technology, and instrumentation; and for outstanding service to the marine sciences.” Bravo!

Recently we went to Jacob’s Pillow, one of this country’s great modern dance venues, to see Hari Krishnan perform. Hari, a beloved Wes dance prof, gave one of the standout performances in From the Horse’s Mouth, a celebration of male dancers. The director of the Pillow expressed her admiration for the Wes dance tradition and for Pam Tatge’s efforts in presenting first-rate work all year long. Check out who the CFA has coming this month.

Speaking of performances, I was delighted to learn that recent graduate Samantha Joy Pearlman ’11 is bringing her great senior thesis show, Devotedly, Sincerely Yours: The Story of the USO to the Philadelphia Fringe Festival. I loved the performance I saw on campus, and I am betting the work just keeps getting better. You can help make that happen here.

Who said summer was a quiet time? And I didn’t even tell you about some of those Wesleyan Spirits singing at Nantucket…

UPDATE on the international scene:

Professor Jack Carr let me know that he and fellow theater professor Yuri Kordonski collaborated on the Russian premiere of Yuri’s adaptation of Crime & Punishment at the Volkhonka Theater in Yekaterinburg, Russia. He’s a spot from Russian TV:  http://www.channel4.ru/content/201207/25/116.volh.html

And professor Joel Pfister wrote to tell me that our colleague J. Kehaulani Kauanui was part of a panel at the United Nations on how indigenous media helps preserve cultures and challenge stereotypes. Kehaulani’s program on WESU can be heard around the world!

Sometimes I wonder if "affected" is right.... The "kick the stone" realism that Hayden punctured is sometimes deeply felt...does that make it more or less "willful?" twitter.com/daniel_dsj2110…

Reading again this well known Hayden White essay, which is truly amazing: “History is perhaps the conservative discipline par excellence. Since the middle of the nineteenth century, most historians have affected a kind of willful methodological naivete.” https://t.co/46Da1krVpw

Yesterday I walked over to where I stand every year @wesleyan_u to congratulate our graduates. We won't be able to do that on campus this May, but we will find another time when it's safe! #MissingStudents 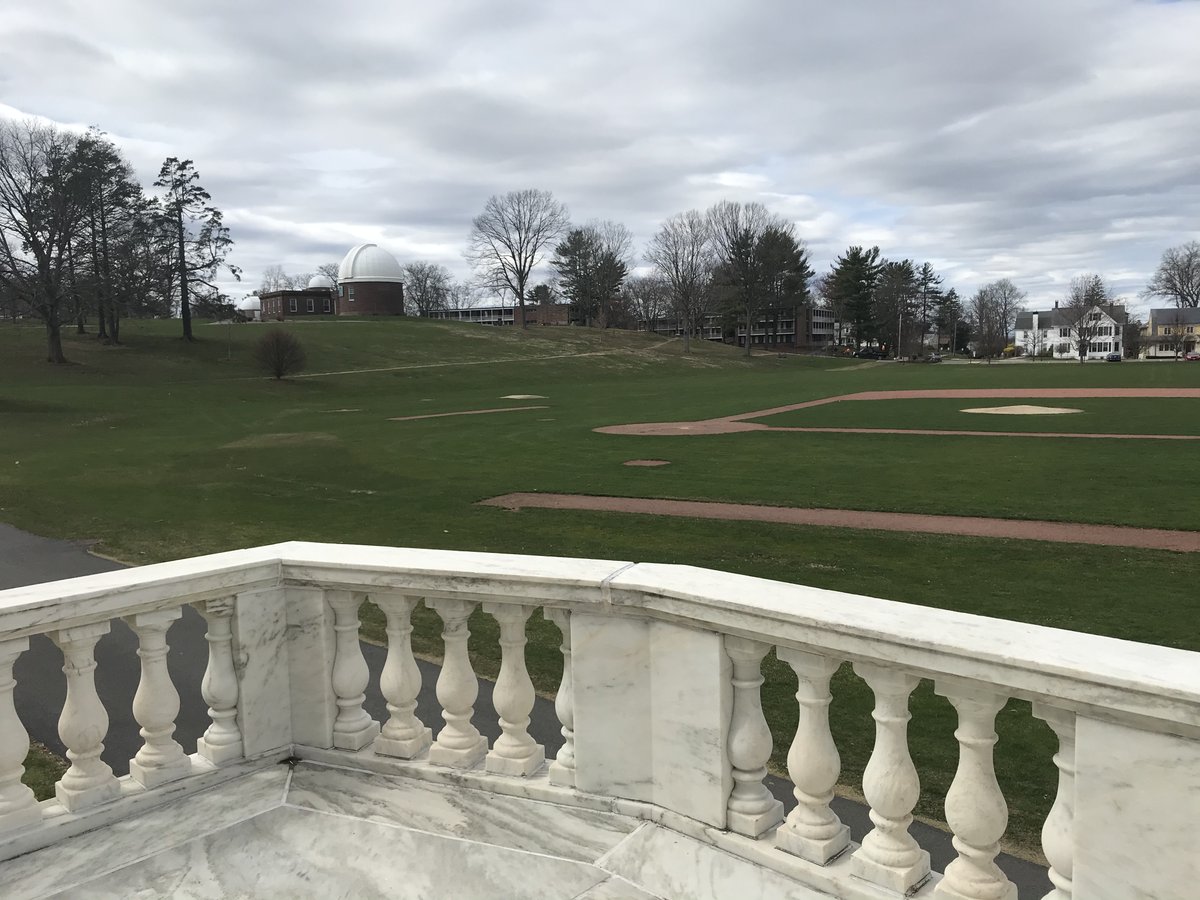 "War is not the answer/For only love can conquer hate" twitter.com/dusttodigital/…

Remembering Marvin Gaye, born on this day in 1939 in Washington, D.C. Here he is performing “What's Going On” in 1972. pic.twitter.com/8tMdXiyBzt

I'm trying to learn how to engage in public sphere while I'm isolated physically at home. "we must turn to virtual tools -- notorious in recent years for being deployed to misinform or stir hatred -- to strengthen networks for democracy" @WEs_engage #E2020 insidehighered.com/views/2020/03/…

This @wesleyan_u Documentary Project comes at such a crucial time. We will continue to build on it! twitter.com/wesleyan_u/sta…

ATTENTION ALL PARENTS- tune into the brand new ⁦@nbcbrooklyn99⁩ tonight on NBC. You might learn something...#Brooklyn99 Retweeted by Michael S Roth

A lack of fast, reliable diagnostic testing has played a major role in the rapid increase of cases of COVID-19. Rahul Dhanda '95 and his team at Sherlock Biosciences are working to change that, shortening the testing’s time horizon to a matter of minutes: newsletter.blogs.wesleyan.edu/2020/03/30/sta… Retweeted by Michael S Roth

See how @wesleyan_u alumnus & @hope2shine co-founder @KennedyOdede are helping people take care of one another in Africa in the face of global pandemic fastcompany.com/90483973/what-…

Read ⁦@georgefwill⁩ on American conservatism’s “embrace of the restless individualism, perpetual churning and creative destruction of a market society” In USA they emphasize “the desire to have” via ⁦@nytimesbooks⁩ nytimes.com/2020/04/01/boo…

We may currently be spread across 15 different locations, but these 88 seams keep us connected 🥎🌎#WesSB2020 🎥 credit: @MaddieIkeda Retweeted by Michael S Roth

Read @PoliakoffACTA ""Part of what a university much teach and model is not only skills and knowledge, but the modes and habits of engaged and responsible citizenship." via @forbes forbes.com/sites/michaelp…

Wesleyan's Digital Design Studio & IDEAS Lab have partnered to help out in a time of need, producing copies of the Verkstan Protective Visor. They're set to ship 200 pieces to New York Presbyterian Hospital in Queens (@NYPQueens) More info on how to help: wesleyan.edu/ideas/COVID19.… twitter.com/mroth78/status… Retweeted by Michael S Roth

Read @daniel_dsj2110 interview with Piketty who argues “that inequality is not natural and that it can be confronted and reshaped through sociopolitical mobilization.” via @thenation thenation.com/article/cultur…

Read ⁦@DouthatNYT⁩ “on the fringes of the right, among QAnon devotees and believers in the satanic depravity of liberalism, the only psychology that matters is paranoia, not conservatism.” via @NYTOpinion nytimes.com/2020/03/31/opi…

Design & Engineering folks @wesleyan_u becoming helpers in a time of need. Making face shields for those on the front lines roth.blogs.wesleyan.edu/2020/03/31/mak…

Making Face Shields in the Crisis

A week later, I've met with my @Wesleyan_u students a few times and have heard about other profs who have been connecting with their students. I'm inspired by their vital curiosity & intense desire to connect #IrrationalTenderness twitter.com/nybooks/status…

“I wrestle with the fact that our obligation to our students doesn’t go away when we move to online classes, but our ability to take care of them changes,” writes @wesleyan_u president @mroth78. https://t.co/ETE7hHl8n3 pic.twitter.com/eQG7oIx2DA

Thanks so much @mroth78! Love to @wesleyan_u thinking of you all. twitter.com/mroth78/status… Retweeted by Michael S Roth

Read @KennedyOdede "Slums are a human design failure, and a reflection of deep systemic injustice...It shouldn't take an outbreak like this to realise that living conditions in the slums are untenable." https://t.co/r86aeBEBAG via @dailynation

@nybooks @wesleyan_u @mroth78 Thank you President Roth, and all of the professors, for making the most of an unusual situation! My son is a freshman, and once again, I am thrilled that he chose Wes! Retweeted by Michael S Roth

Wes101: Step into the classroom (or out of it) for a first-year experience like no other. Exploring the Cosmos (ASTR 105) gives students the chance to practice their quantitative skills while exploring the wonders of the universe. See yourself here: bit.ly/FutureWesCardi… Retweeted by Michael S Roth