This afternoon (Monday), I sent the following note to the campus:

I’ve been reading comments, blogs, and listening to students who are reacting to the news concerning Scott Backer, former Associate Dean of Students. I realize that in the blog post I wrote yesterday upon returning to campus, I neglected to say the most important thing: I am sorry. I apologize that the university hired someone who had been fired for grossly inappropriate behavior and put him in a position of responsibility for dealing with survivors of sexual assault. The university did not know his past, but we needed to know. We failed at that, and I apologize for the pain this has caused members of our community.

I know conversations will continue about this subject in the days and weeks to come. Student Affairs, CAPS, and the Office of Equity and Inclusion all have resources available.

We can and will do better.

This weekend the Boston Globe ran a story in a series concerning the ways some private high schools have dealt with sexual misconduct issues. This morning’s story detailed how these schools allow employees found responsible for infractions to leave without a record of their misdeeds. Through the Globe’s investigation, Wesleyan learned that Scott Backer, then Associate Dean of Students here, had been terminated at Vermont Academy for clearly inappropriate behavior. As Dean Mike Whaley described in a campus email today, the high school’s officials provided glowing recommendations for Mr. Backer – they concealed that he was terminated and the reasons for the termination.

Many are asking why Wesleyan didn’t know about his misconduct when Mr. Backer was hired back in 2007. Upon learning of the Globe‘s investigation, I initiated a review of the hiring process; the background check performed at the time didn’t turn up anything relevant. We have long since strengthened those checks. Of course, no check at the time would have turned up a yet-to-be filed civil lawsuit against Mr. Backer.

Within hours of learning about the circumstances of his termination at Vermont Academy and the efforts to conceal these circumstances, the university fired Mr. Backer. Since as Associate Dean he sat on and often chaired panels dealing with sexual misconduct, we hired an independent firm expert in these matters to review his performance. I should stress, though, that Mr. Backer never had sole authority over cases. He was part of a process involving several people and appropriate balances. Nonetheless, we turned to the law firm Pepper Hamilton, who most consider the best firm in the country for these kinds of issues, to investigate cases with which Mr. Backer was involved. We were very relieved to learn that they found nothing amiss.

Some have asked why we didn’t make all this public ourselves? Although I did inform the leadership of the Board of Trustees and the Cabinet, after much deliberation I decided that it would have been wrong to discuss publicly why we had fired an employee unless there was a compelling reason to do so. If Pepper-Hamilton had found something problematic in Mr. Backer’s work at Wesleyan, that would have been a reason to bring this to the attention of the campus. Unlike Vermont Academy, Wesleyan has created an employment record that includes termination for cause for Mr. Backer. But I do not think it appropriate to publicly discuss a personnel matter, unless that situation was already made public. That has happened today, which leads me to write now.

In an essay on the Obama Administration’s legacy for higher education, I recently wrote that “colleges and universities are responsible for abusive aspects of student culture that prevent women (and members of LGBTQ communities) from having access to the same benefits of higher education as most men do.”

Colleges can no longer turn a blind eye to sexual assault without fear of consequences. As survivors came to realize that they “are not alone,” they forced colleges to take sexual assault seriously as a civil-rights issue. Part of this was just shining a bright light on the problem; for example, requiring the publication of assault statistics. At my own university, there has been a sharp increase in the number of reported sexual assaults. This is a painful, painful process — but a necessary one. Colleges that have few to no reported incidents of sexual assault are today viewed not with admiration, but with justified suspicion.

I am grateful for the Boston Globe’s investigation, but I would be very sorry if the university’s hiring of Scott Backer in 2007 creates suspicion about our efforts to counter the scourge of campus sexual assault. We are training hundreds in bystander intervention, we have cooperative agreements with law enforcement and community-based groups, and with input from students and experts in the field we have refined our procedures to better assist survivors and fairly adjudicate cases.

With help from the entire community, we will continue our efforts to support survivors, educate the community about the issues, and to hold accountable anyone found responsible for violating our policies.

We did this for incoming students @wesleyan_u over the summer twitter.com/bryanalexander…

Read @lsjamison & @literarytswift “I wanted to show that a woman can tell her story &create her own happy ending that doesn’t include marriage &a man. My happy ending is through my work and writing, not in reproduction. There aren’t enough models for that” theparisreview.org/blog/2020/08/0…

Powerful call for creativity & commitment from @CathyNDavidson & @dianne_s_harris “What better time than now, in this overwhelming and soul-crushing historical moment, to think along with our students about education’s highest calling?” insidehighered.com/views/2020/08/…

Read ⁦@JenSeniorNY⁩ quote ⁦@DaphnedeMarneff⁩ on ongoing traumatic dislocation: “It’s like we’re in an endless car ride with a drunk at the wheel. No one knows when the pain will stop.” via @NYTOpinion nytimes.com/2020/08/05/opi…

We lost power yesterday in the storm, but puppy Lola didn’t 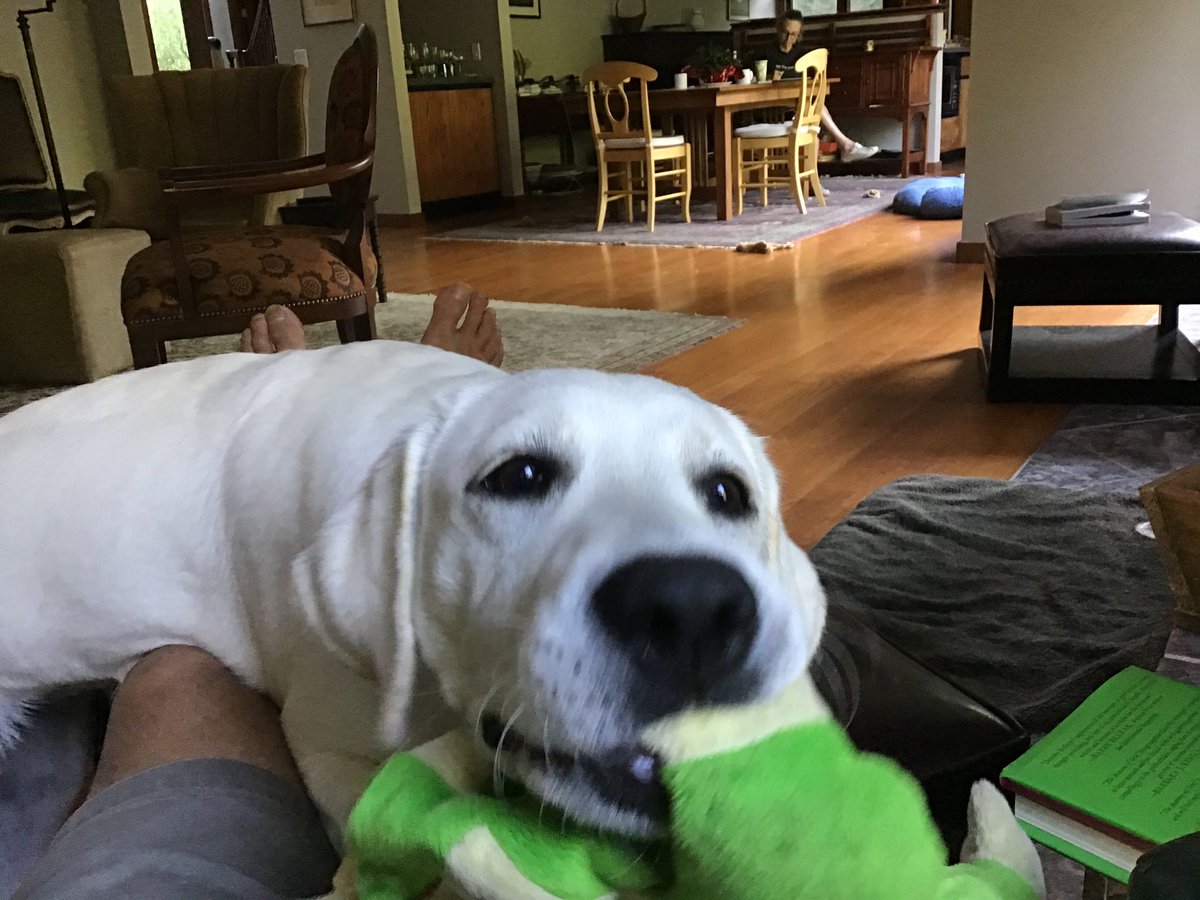 This ⁦@JennyBoylan⁩ column should have come with a warning! I just had breakfast & now I want a G&T In a bitter, bitter summer, memories of refreshment appreciated... via @NYTOpinion nytimes.com/2020/08/04/opi…

Thanks, Jason. Looking forward to a change in the weather twitter.com/jasonintrator/…

Kudos to Wesleyan President ⁦@mroth78⁩ for steadfastly writing into the storm. Great leadership during these times. https://t.co/Bq47O4jrss

"violence removes the need for articulate expression. This president has more difficulty expressing himself clearly than any American leader in the last hundred years" thenation.com/article/politi… twitter.com/maggieNYT/stat…

My take on why Trump needs violence “A climate of fierce intensity is easily transformed into a climate of fear, and this president has a gift for leveraging the fears of others to his own benefit” via @thenation thenation.com/article/politi…